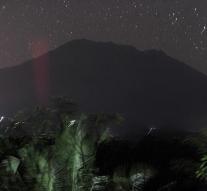 ƒdenpasar - Thousands of inhabitants of the Indonesian island of Bali have evacuated from villages around the volcano of Agung. The authorities urge tourists and residents to stay away from the smoking crater for about 6 kilometers.

So far, nearly 6000 people have left the area in response to the authorities. 'Volcanic activity remains high and there are indications that lava rises and causes earthquakes,' said a spokesperson for the National Disaster Response Service.

Not all inhabitants of villages around the volcano soon made evacuation. 'We need to feed the animals, so we'll do that first,' said a woman to television channel tv.