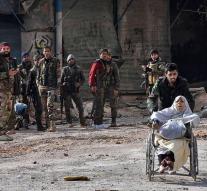 - The evacuation of civilians and the remaining rebels in Aleppo on Wednesday delayed due to unknown reasons. That says the Syrian Observatory for Human Rights.

The observatory said the first group of evacuees at 04. 00 pm our time (05. 00 in Aleppo) was scheduled to leave an hour later but that no one had left the area. Sources report that many coaches are ready to evacuate people but nothing has been started.

A pro-Syrian TV station, Orient TV, reported that the evacuation may be postponed until Thursday.

From the camp of the rebels is said that the departure of people stopped by Shiite militias commissioned by the government.

East of Aleppo had since the second half of 2012, a stronghold of jihadists and rebels. Tuesday night brought an end to the fighting between government forces and rebels after Russia and Turkey had made arrangements for a cease-fire and evacuation.