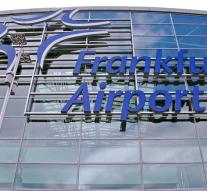 frankfurt - A big alarm was made at Frankfurt Airport because an unauthorized person slipped through the security in terminal 1. A police spokesman told Bild. The German newspaper has information that concerns an adult and a child.

The airport reports on Twitter that several piers are being evacuated by the police. 'As a result of this measure, a disruption of air traffic can be expected', according to the airport. Bild reports that hundreds of travelers are affected by the incident.

Due to a similar incident, many thousands of travelers were duped at the airport in Munich at the end of last month. There, a woman circumvented security, with a partial eviction as a result. Hundreds of flights were canceled.