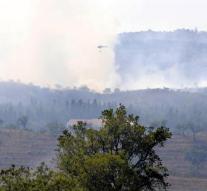 - In the extreme south of Spain, near Gibraltar, raging forest fires have led to the evacuation of hundreds of tourists, reported the Spanish news agency Europa Press Wednesday.

After the alarm had been beaten Tuesday 545 people were evacuated in haste, among whom 420 tourists from a hotel complex on the seafront in the town of La Alcaidesa, six kilometers north of the British crown colony (Gibraltar).