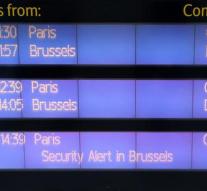 london - Employees of Eurostar, the high speed train between continental Europe and the UK, will soon strike a total of seven days. That the union of railway employees RMT announced Wednesday.

The union said that employees stop working at the weekends from 12 to 15 August and from 27 August to 29 August.

According to the RMT loves Eurostar the board itself is not concluded an agreement in 2008 on a good balance between working hours and leisure time for staff. The union said that 95 percent of members agreed with the proposal to stop work.