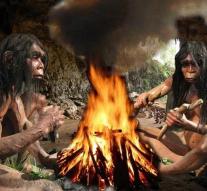 york - Europeans have about a million years ago, learned to cook their food on fire. According to a study by Spanish and British scientists.

The researchers studied the remains of a 1.2 million year old hominid. Those remains were found in 2007 in northern Spain. The teeth they found microscopic particles of meat and starch. Since no carbon deposits were on, they were raw. Also revealed that the hominids had inhaled smoke, what would have happened if they had their food cooked over a fire.

Traces which hominids cooked their food, previously have found 800 000-year-old remains in Spain and Israel. That means that the earliest Europeans should have learned in the intervening time to use fire. About a million years ago so.

By cooking food, baking, frying, roasting or grilling the human body can extract more energy than when it is raw. About 800 000 years ago the brains of the ancestors of man to grow rapidly, an important step in the evolution.