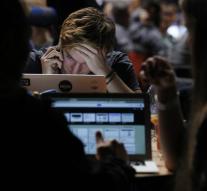 brussels - The European Parliament and the national governments of EU Member States have reached agreement on a cyberwet for the European Union. With the new law, companies in key sectors such as transport, energy, healthcare and finance required to include severe cyber attacks to the authorities.

Internet companies like Google, Amazon and eBay are also obliged to report breaking into the computer systems at the national authorities. Social media like Twitter and Facebook are not mentioned in the law.The agreement on Monday cyberwet was reached after negotiations that lasted five hours. According to European Commissioner Andrus Ansip, the rules ensure that consumers' confidence in online services.Besides the obligation to notify security breaches, companies in major sectors under the new law also meet a number of security requirements. Offenders who keeps the law can expect a fine.
NEW