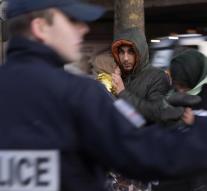 The suspects come from Syria, Algeria, Egypt, Lebanon and Tunisia. They spent about 500 euros charged for the journey along the so-called Balkan route and their customers via Hungary or Italy were channeled to Austria, Germany and France. Mostly recruited in Italy by 'straw men' who sometimes ninety vehicles had to their name.

The operation against the criminal syndicate was led by the Italian police. Europol was responsible for the international coordination. Besides possessions are significant amounts seized. More arrests are not ruled out.