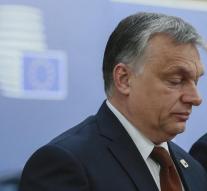 strasbourg - The patience of the European Parliament with Hungary is on. The nationalist government of Prime Minister Viktor Orbán would constitute a danger to the rule of law and democracy and should be addressed.

A parliamentary vote voted in Strasbourg on Wednesday for steps to officially state that Hungary violates European laws and values. A number of members of the European People's Party (EPP), the largest parliamentary group in which Orbán Fidesz party is a part, also voted. Among them the five-headed CDA delegation.

In a debate, the parliamentarians sweep up the floor with the nationalist government of Prime Minister Viktor Orbán last month. Service relations with the press freedom, the rule of law, NGOs, minorities and immigrants were based on keen criticism. The European Commission recently demanded adaptation of the recent Hungarian university law, which would be contrary to academic freedom.