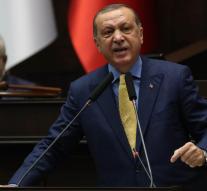 brussels - The European Court of Auditors examines the financial support that Turkey has received from the EU as a candidate country. Turkey received almost 2.2 billion euros in pre-accession support in 2007-2013, with a view of another 4.3 billion. The money is intended to support reforms needed for accession.

However, the talks have been silent for a while, and the reforms in Turkey have been reversed in recent years, the office notes. The effectiveness of the aid has never been investigated.

The auditors will focus on efforts in the field of the rule of law, democracy, education and social policy. The results of the research are expected in the first half of 2018.

Since the negotiations began in 2006, discussions on fourteen of the 35 necessary subjects for accession have been launched. Only one of them, about research and science, has been completed. A part of the European Parliament wants the talks to be officially suspended, leaving Turkey no longer supported. Only Austria has expressed its strong commitment to terminating Turkish candidacy.