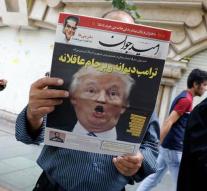 luxembourg - The EU Foreign Ministers agree on the Iranian nuclear program, appeared on Monday before consultation in Luxembourg. Several ministers called on the US Congress to maintain the 2015 deal between Iran and six world powers.

US President Donald Trump said Friday's agreement failed to certify, but it is Congress that has to decide on this. 'It is clear not to the president of any country in the world to end an agreement of this kind,' said EU Foreign Minister Federica Mogherini. She expects a 'strong signal of European unity. '

'It would be a big mistake if one of the partners would go in another direction,' said Minister Bert Koenders. 'The agreement is in the interests of international peace and security. I hope the US Congress makes the right decision. 'Koenders expressed the expectation that the agreement will remain in place. He acknowledged that there are concerns about human rights and the development of ballistic missiles in Iran.