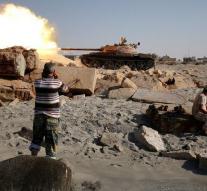 brussels - The European mission to help the Libyan authorities has been extended by one year to strengthen surveillance. EU member states Thursday also approved the budget of 17 million estate.

Last year the mission was given the additional task to prepare for a possible civilian operation to assist the Libyan authorities to combat illegal migration, smuggling and terrorism. Which can only be started with the permission of the Libyan government, which controls only a small part of the North African country.

The so-called EUBAM mission was launched in 2013 and has been operating for two years from the Tunisian capital, Tunis, Libya because it is unsafe.


The EU also launched last year the maritime operation Sophia that smuggling from Libya to counteract through the Mediterranean.