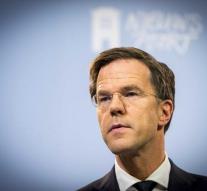 brussels - The leaders of the 28 member states of the European Union come together on Thursday and Friday in Brussels. The regular summit is dedicated to the relationship with Russia, the EU trade policy and migration. Also for the situation in Syria has been reserved time.

Prime Minister Mark Rutte will be colleagues Thursday night to catch up on the Dutch position around the Association Agreement between the EU and Ukraine. The British prime minister Theresa May may speak during the sacrament, about the announced departure of the UK from the EU.

Fridays are the main industrial and trade policies, including the deadlock in the EU's free trade agreement with Canada is discussed. Wallonia is against signing the agreement and hopes of all the other parties that the European Commission and Belgium to find a solution.

The summit begins Thursday at 16. 00 and will probably take until late in the evening. Friday morning, the political leaders are expected again at 10. 00 am.