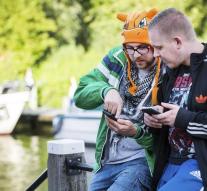 amsterdam - The European Football Championship where Orange not even participated, which was this year's most popular search on Google in the Netherlands. Then came the video game Pokemon Go and the new iPhone 7.

This is clear from Google's Year in Search, the annual review of 2016. The top five further Formula 1 driver Max Verstappen and the deceased singer David Bowie.

Also at Douwe Bob, the Olympic Games in Rio and Donald Trump was much sought after in our country. Singer Anouk was Google's most searched Dutch wife and Geert Wilders, the Dutch politician top. When it comes to international celebrity Justin Bieber is at the top.