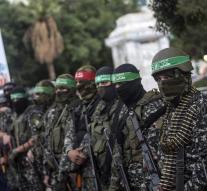 luxembourg - The Palestinian movement Hamas must remain on the European list of terrorist organizations. This has determined the European Court of Justice on Wednesday. It rejected a lower court decision from 2014 to delete the move from the list.

That lower European General Court then ruled that Hamas's title was terrorist based not on the judgment of competent authorities but loose on media reports. But this has to be carefully reconsidered by the General Court, the European Court of Justice said.

The Palestinian version of the Egyptian Muslim Brotherhood, Hamas's Islamic Resistance Movement, dates back to 1987. Hamas does not recognize Israel, but considers it a part of occupied Palestine. Hamas, or its armed wing, is described as terrorist by, for example, Israel, Australia, Canada and the United States. In the Arab region, this rigorous Sunni movement is viewed by many regimes with suspicion. For example, Jordan has banned movement and Egypt is participating in the Gaza Strip siege that has been held by Hamas since 2007.