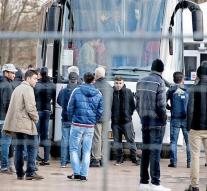 brussels - Youngsters can register from Wednesday for the so-called European Solidarity Corps. The idea is that they gain experience in another country, for example education, health or a food bank. Also assist in the integration of refugees and the protection of nature are possible.

The corps has to mean volunteers and trainees between eighteen and thirty years the opportunity something for society. The skills learned in two to twelve months can be a stepping stone in finding a job. The cost of accommodation and living expenses are covered, in case of an internship for a small fee comes in.

The European Commission launched the Solidarity Corps Wednesday in Brussels, but also attention is paid in fourteen other European capitals. President Jean-Claude Juncker announced the corps in September as part of the fight against youth unemployment. It is planned that participated in 2020 100. 000 young people. Young people from non-EU countries such as Norway and Turkey to join.

Brussels Wednesday also presented ErasmusPro, a new part of the student exchange program Erasmus + EU. It provides the next few years 50 000 young people the opportunity to get the tricks of a craft mastered in another EU country, for example through internships and apprenticeships.

That is already done, but the average length is only one month. With ErasmusPro can be said that six to twelve months. The program would include language training and assistance EUR 400 million cost.