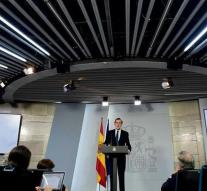 - Despite the police violence in Catalonia, the European Commission remains behind the Spanish government. A spokesman called the parties to go on 'from confrontation to dialogue'.

On Sunday, it was still deafening in Brussels as regards a response from the European Commission, which saw the EU's day-to-day governance. Spokeswoman Margaritis Schinas did not agree that it took too long. 'It is up to us to determine when we are ready and come up with a statement.'

As in recent weeks in the run-up to the referendum, it has again been said that it is an internal Spanish case. According to the Spanish judge, it was an illegal referendum and the Commission agreed. On the police violence and the question of who is responsible, the spokeswoman did not want to go further.

For the EU, the Catalan referendum is an explosive file. On the one hand, it is an internal Spanish issue, but at the same time Brussels always has the mouth of human rights and democracy. Curvy toes look at the way in which Spanish Prime Minister Rajoy tackled the issue, which seems to be throwing oil on the fire. For the time being, however, the Commission remains in favor of the Spanish Government.