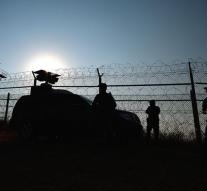 - The European border and coast guard will officially start Thursday. EU Commissioner Dimitiris Avramopoulos (Migration) returns in the morning the launch of the Bulgarian-Turkish border, together with the Bulgarian Prime Minister Boyko Borisov and Fabrice Leggeri, the director of the developed European border agency Frontex.

The service established in Warsaw gets a much stronger role in the surveillance of the external borders of the EU, the fight against smuggling and other transnational crime. EU countries remain solely responsible for their limits.

Emergency is a border guard pool 'rigged from 1500, which the Netherlands proposes fifty available. Member States should also supply material quickly in a crisis. The agency focuses on discovering and preventing weaknesses along the external borders. It also gets a coordinating role in the return of rejected asylum seekers and economic migrants.