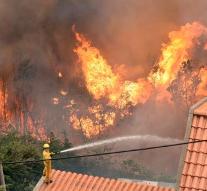 - Portugal has enlisted the help of Europe to put out hundreds of fires raging in the country, especially in the north.

An Italian firefighting aircraft and two Spanish units will support the Portuguese fire brigade. The European Commission looks to the EU Member States which continue to be granted assistance.

Since Saturday have been 366 forest fires and the situation is deteriorating daily. Thousands of firefighters are busy to contain the fires, but they can not just strongholds. In recent days, houses were evacuated prey to the flames, villages and highways were closed. One person was killed.


Portugal called for European help in the so-called European Civil Protection Mechanism to run, which provides worldwide disaster relief. The country started it for the last time in August 2013.

The Portuguese island of Madeira is subject to forest fires, which certainly have claimed four lives. More than a thousand people have been evacuated.