Home / World / European armies are going to work together structurally 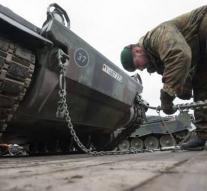 brussels - The armed forces of EU countries have the opportunity to work together in a structured way. In many areas, groups of Member States have already collaborated, but the 28 EU leaders unanimously gave green light on Thursday to make it more systematic.

The European Defense Fund also received full support. That must help countries to develop and buy weapons. The European Commission will invest € 590 million by 2020 and thereafter at least 1.5 billion a year.

Finally, the leaders decided to simplify the use of existing multinational army units- the so-called battle group. Those exist for years, but have never been used. This was due, among other things, to the cost-sharing, but now it has been decided to wear it in an EU context.