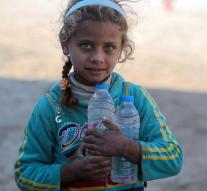 brussels - A cargo plane on Monday, the first European emergency aid for the people of Mosul delivered in Iraq. The contains 40 tons of goods include 3,000 blankets, 268 family tents, sleeping mats and hygiene products.

Follow later this week more flights. Tuesday arrives Austrian aircraft with a thousand kitchen sets and more tents and blankets in nearby Erbil. A day later follow belongings from Denmark and Sweden, including educational and medical equipment. Germany has offered generators.

The emergency aid is in addition to the 134 million in humanitarian aid that the European Commission has made available this year for vulnerable groups in Iraq. The fighting between the army and terrorist IS in and around the northern Iraqi city last for months and allow more and more people to leave their homes. End of this year, more than 13 million Iraqis depend on humanitarian aid is expected.