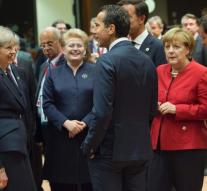 brussels - Russia is trying to sow discord in the European Union. There is consensus between the leaders of the 28 EU member states agree. They spoke Thursday night at a summit in Brussels on 'above all' to preserve unity and united action against Moscow. With that EU Minister Donald Tusk summed up the discussion on Russia.

'We need a common response and to defend the interests of Europe,' said German Chancellor Angela Merkel.

Miscellaneous Russian hostilities came to the table of military intimidation to disinformation campaigns and political interference in internal European affairs, said Tusk. He stressed that the EU aims to increase tensions with Russia, but wants to enter into dialogue.

The leaders decided to keep 'all options' open if Russia and Syria 'atrocities' continue to perform in Aleppo, as is in the final declaration. In a draft version was still an explicit reference to sanctions against individuals and organizations, but it is ultimately deleted.