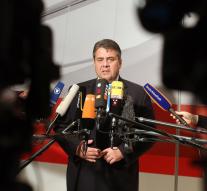 - Europe is the legacy of Helmut Schmidt. With these words, the leader of the German Social Democratic SPD Vice Chancellor Sigmar Gabriel, the former SPD chancellor Schmidt praised.

Schmidt died Tuesday in his hometown of Hamburg at the age of 96.

He was Chancellor of West Germany from 1974 to 1982 and guided the growth miracle by oil crises, terrorist attacks and the lows of the Cold War. President Joachim Gauck said that the country mourns one of the most important politicians after the Second World War. Schmidt was Gauck as " a man of action, clear thinking and free speech ".

The Christian Democrat Finance Minister, Wolfgang Schäuble praised the deceased ex- head of government as one of the greats of Germany. " He always knew exactly where it came and practiced especially in times of crisis a decisive political. "