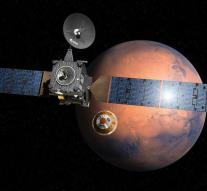 darmstadt - Europe starts Wednesday to double space mission to Mars. A satellite will then enter orbit around the red planet. Simultaneously a lander to be checked be put down on the surface.

In recent months they flew together to Mars. They should include examining the atmosphere of our neighboring planet. The mission is performed with Russia.

The satellite is called the Trace Gas Orbiter. Which delves primarily into methane, a gas that can indicate minor forms of life. To get into orbit around Mars, the probe Wednesday should slow down so hard that he is gripped by the gravity of the planet. That braking starts at 15. 04 hours Dutch time and lasts over two hours.

More than an hour later, at 16. 42 hours, landing the Schiaparelli begins. He comes with a speed of 21 000 kilometers per hour within the atmosphere of Mars. This is done at an altitude of 121 kilometers. He then has less than six minutes to slow down.

This is done with the friction of the air and the use of a parachute. To 16. 48 hours he will have to gently flops on the surface. Ten minutes later have the redeeming signal that the landing is successful, arriving at the Mission Control in Germany.

The landing of the Schiaparelli is designed primarily to test the technology for part two of the mission. Around 2020 Europe and Russia want namely to Mars again. Must be an unmanned scout. Which can travel along the surface and drilling meter deep holes, looking for more signs of life.