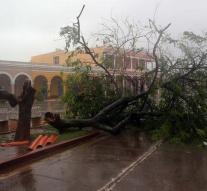 brussels - The European Commission will immediately make available 2 million euros for aid to the Caribbean islands affected by Hurricane Irma. The money is intended to support the recovery of vital facilities, such as health, water and sanitation.

'Hurricane Irma has drawn a trace of destruction in many countries. It is our moral duty to help the people whose homes and lives are destroyed or threatened. We are fully solidarity with everyone in the region, as long as it is necessary, 'said EU Commissioner Christos Stylianides (Humanitarian Aid).

The money comes in addition to the EU's support in the form of delivering satellite imagery of the disaster areas. This maps the damage. Countries should apply for this assistance themselves. According to the commission, the Netherlands has done that for Sint Maarten. Also for Guadeloupe, Saint Barthélémy, Saint Martin and the British Virgin Islands, the European satellite program, called Copernicus, is called.