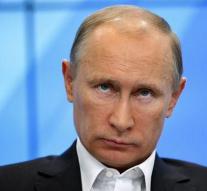 brussels - The economic sanctions imposed by the European Union against Russia will be extended by six months. That said EU president Donald Tusk on Thursday at the summit of government leaders in Brussels. The penalties were instituted because of Russian interference in eastern Ukraine in 2014.

German Chancellor Angela Merkel and French President Emmanuel Macron talk to their colleagues during dinner on the state of affairs in Ukraine. They focus mainly on the implementation of the Minsk agreement, to which the sanctions are linked. The conflicting parties still do not comply with the terms of the agreement, including a ceasefire agreement.

The expectation is that the sanction will be officially decided in the short term. This means that the funds in the EU's Union remain blacklisted and their travel ban to the EU remains in force. The European capital market remains close for a number of Russian banks and energy and defense companies. The export of technically sensitive goods to Russia remains limited.