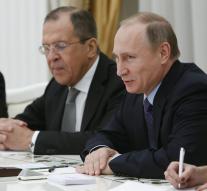 brussels - European leaders want to end this week to extend sanctions against Russia for six months. Moscow would still not have done enough to get adhered to the agreements of Minsk, which means that the separatists in Ukraine should return to their loft.

Only Italian Prime Renzi makes a reservation. He finds it strange that the EU sanctions on the one hand set against Russia and is busy on the other hand, the capacity of the Russian gas pipeline to northern Germany, Nord Stream II, double. This is also necessary because the downing of a Russian fighter by the Turks the construction of the 'South Stream' through Turkey now seems misjudged. Europe remains dependent on Russian gas, Gasunie also participates in the project.