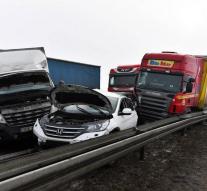 luxembourg - The number of people affected by road accidents in the European Union must be halved by 2030 compared with 2020. This target posed the 28 EU transport ministers in Luxembourg on Thursday. There are now around 135,000 annually. More attention should be given to cyclists and pedestrians.

In 2010 it was agreed to halve the number of traffic deaths in ten years. That is unlikely to succeed. Traffic demanded 25,500 lives, 19 percent less than in 2010. The social costs for all road casualties are estimated at over 100 billion euros a year.

To improve road safety, more 30 kilometer zones should be set. Traffic safety rules should also be better maintained. And alcohol and drugs in traffic need to be tackled harder.

The Netherlands is one of the safest countries in the EU with 33 traffic deaths per million inhabitants.