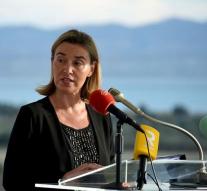 brussels - The European Union and call on the EU Member States to rescue Turkey's parliamentary democracy and respect the rule of law and human rights. The country must guarantee the right to a fair trial, as befits a candidate member of the EU.

Writing EU foreign policy chief Federica Mogherini Tuesday in a statement. The EU countries are very concerned about the recent developments in Turkey. The possible reintroduction of the death penalty, restrictions on freedom of expression and social media, the closure of media and arrests of journalists and parliamentarians of the opposition was 'extremely worrying. '

All these measures weaken the rule of law and bring parliamentary democracy at risk, says Mogherini. That raises tensions throughout Turkish society, especially in the Kurdish southeast.

The EU supports Turkey in its fight against terrorism, but operations against the PKK should be in line with the basic principles of democracy. A return to a credible political dialogue is essential for Turkish democracy and stability in the region, said in a statement. Member States are ready to continue the dialogue with Turkey, says Mogherini.

Foreign Minister Bert Koenders is 'very concerned' about Turkey. 'Democracy and human rights are under pressure. 'He announced that he' insisted emphatically a clear position of the European Union. '

The European Commission presents a progress report Wednesday on the accession process of Turkey to the EU. From leaked concepts shows that this is a very critical report. Including within the European Parliament to vote to suspend the accession negotiations.