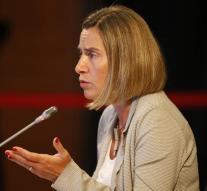 brussels - The European Union is ready to provide emergency aid to the countries affected by Hurricane Irma. The EU Solidarity Fund can also be called upon to contribute to reconstruction. The European Copernicus system provides current satellite imagery that can help identify the damage.

Member States can call on the fund in case of a major natural disaster. In this case, the Netherlands and France could do that if the damage to the Caribbean is being invented. Since 2002, 24 European countries have received over 5 billion euros in total for 76 disasters.

The European Coordination Coordination Center and the humanitarian aid agencies in the Caribbean region are following developments closely. They are in contact with countries willing to provide assistance. There are experts in Haiti and the Dominican Republic, according to the European Commission. Extra staff may be deployed if necessary.

'Our heart is with the victims and the people affected by Hurricane Irma,' said EU Foreign Minister Federica Mogherini.