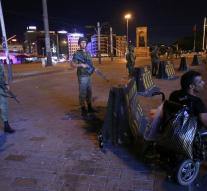 brussels - The attempted coup in Turkey seems to be well prepared and not the work of a few colonels,, ''. That explained a source in the European Union that Turkey as a candidate country is watching.

,, It looks like a relatively well-orchestrated coup by a substantial part of the army, not of a few colonels, '' said the source.,, Given the scale of the operation, it is difficult to imagine that they will stop just before the victory. '