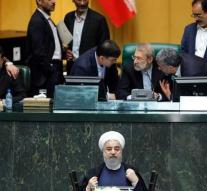 brussels - The European Union has extended its sanctions against Iran for one year due to serious human rights violations. The assets of 82 Iranians in the EU remain frozen. They also do not receive a visa for Europe.

In addition, companies in the EU are not allowed to export items to Iran that can be used to suppress the population or to intercept telecommunications. The penalties have been in effect since 2011 and have been extended every year since then. The intention is to force the theocratic regime to comply with international obligations.

The UK, France and Germany want the EU to impose additional sanctions against Tehran because of its role in the conflict in Syria and ballistic missile tests. The hope is to persuade the US not to cancel the 2015 international agreement on the containment of Iran's nuclear program.

At the meeting of EU foreign ministers in Luxembourg on Monday, Iran is on the agenda.