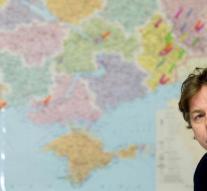 luxembourg - The economic sanctions of the European Union against the Ukrainian peninsula Crimea will continue. Foreign Ministers of the 28 Member States extended the penalties for the imprisonment by Russia on Monday by one year.

European companies may not import goods from the Crimea and may not invest. Certain technologies for extracting oil, gas and other raw materials may not be exported.

Restrictions apply to transport and telecommunications. Furthermore, European cruise ships shall not be allowed in ports on the peninsula on the Black Sea, except in case of emergencies.

Minister Bert Koenders called it 'important' to extend these sanctions. 'This extension has the full Dutch support. The Crimea must not be forgotten. '

Against Russia, the EU also has sanctions because of the illegal annexation and aggression in eastern Ukraine. These are expected to be extended by six months soon. Minsk peace agreement is still not respected.