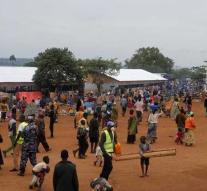 brussels - The European Union is making 49.5 million euros available to combat the humanitarian crisis in the Democratic Republic of Congo. For the neighboring countries of Tanzania, Rwanda and Congo-Brazzaville 10.9 million is being released, mainly for assistance to Congolese refugees.

According to the UN, more than 13 million people need help. Of the 4.5 million displaced persons, 630,000 have fled to neighboring countries. The money is spent on food, water, shelter, health care and education for children.

According to EU Commissioner Christos Stylianides (Humanitarian Aid), there is no time to lose. He is currently visiting aid projects in the Congolese regions of North and South Kivu. In the capital Kinshasa he talks with the government about the attacks on aid workers and guaranteeing access for humanitarian organizations.

A donor conference will be held in Congo on 13 April for Congo. It is organized by the EU, the UN, the Netherlands and the United Arab Emirates.