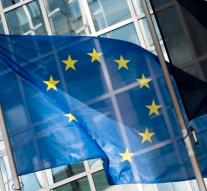 brussels - The European Union and the EU Member States should quickly ratify the Paris climate agreement concluded in December. That call did the European Parliament on Thursday.

The approval should be there for the next climate conference in November in the Moroccan Marrakech. Temporary EU president Slovakia pledged Thursday to try to reach rapid agreement between Member States. In several EU countries still exists opposition to the agreements.

China and the United States have now ratified the agreement. It takes effect in 55 signatures, which must account for at least 55 percent of global greenhouse gas emissions. The counter now stands at 27 countries that together emit more than 39 percent of the global greenhouse.


It is inconceivable that the Paris Agreement enters into force without the signature of the EU, said chairman of the Environment Committee Giovanni La Via, in particular referring to the European,, leadership '' in the fight against climate change. The necessary ratification of the EU parliament comes anyway.

MEP Bas Eickhout,, finds regrettable that the European Union not currently engaged in order to stay ahead in the green economy. ',, That Europe is a precursor called on climate but is now overtaken by former shows the biggest sleepers that we have embarked definitively the path of sustainability. ''