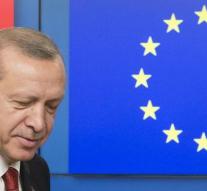 strasbourg - The EU must stop negotiations with Turkey on accession if the country drives further European democratic values. That call made a large majority of the European Parliament (477 for, 64 against and 97 abstentions) Thursday in Strasbourg.

If Ankara's planned constitutional amendments to give President Erdogan more power unchanged, it is time to end the candidature, Parliament finds. The hundreds of millions that Turkey receives annually to prepare for accession should then be spent on Turks who believe in European values, according to European Parliamentary and Turkey rapporteur Kati Piri (PvdA).