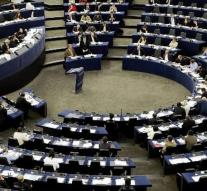 strasbourg - Not occasional government by undemocratic 'misconduct' give a slap on the wrist, but all EU countries assess each year whether they meet European standards for democracy. The European Parliament welcomed the proposal in Strasbourg on Tuesday with ample majority.

'We need structural attention for ensuring democracy, rule of law and fundamental rights in all member states and the EU institutions,' said MEP and initiator Sophie in 't Veld (D66). She wants the European Commission to draw up a binding pact to issues such as independence of the judiciary, media freedom or gay rights.

Following this are recent developments in Poland and Hungary. Hungarian Prime Minister Viktor Orban dismissed independent judges and closed critical newspapers, the Polish government gave the Constitutional Court offside. 'Candidate countries are scrutinized when joining the EU. But why then looking away? '

Vice-President of the European Commission Frans Timmermans threatening sanctions if Poland does not grant a number of Brussels demands to restore the rule of law. As a last resort the Polish voting rights may be suspended in the EU, but should, in agreement with other Member States and will probably not happen. The commission is according to In 't Veld get more resources sinners get in line. '

They suggested that a panel of independent experts to draw up an annual report which will be assessed between the European Parliament and national parliaments.