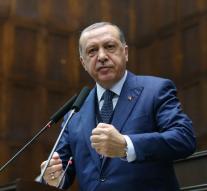 brussels - If Turkish President Erdogan is indeed given more power, the negotiations on accession to the EU must be officially suspended. A call from Turkey's rapporteur, Kati Piri, was received on Tuesday by the Foreign Affairs Committee of the European Parliament, with 51 votes in favor and three against. The verdict is expected to be taken over by the entire parliament next month.

The Turkish population voted in April in a referendum for a constitutional amendment that gives the President much more powers. If unchanged, it is EU membership of the job, according to the commission. The idea is to expand the customs union with Turkey instead.

Parliament has long been concerned about the Turkish attack on the rule of law and freedom of the press. It became elevated after the last year's coup attempt and the state of emergency that was proclaimed thereafter.

'Despite all the differences, the European Parliament speaks with one voice against human rights violations in Turkey,' said Piri. The arrest of thousands of civilians, including parliamentarians, gives her much concern.

The EU Member States do not want to formalize the accession negotiations.