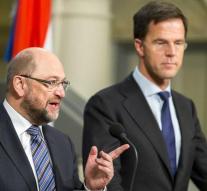 brussels - A European deal on registration, storage and exchange of air passenger data between EU countries seems less close than thought. The three political groups in the European Parliament (EP) with a majority willing to block the tentative deal between the three EU institutions

That decided the presidents of the political groups Thursday during a meeting in The Hague, together with European Parliament President Martin Schulz, sources said.Wednesday closed the negotiators of the European Parliament, EU Member States and the European Commission a preliminary agreement on the so-called Passenger Name Register (PNR). Thus, among other things, require the Member States on a voluntary basis information by going to exchange passengers. But the Christian Democrats, Social Democrats and Liberals in the European Parliament want a mandatory data sharing.The presidents put the threat to block the deal their own chief negotiator for the block.The PNR record dragging on for years and is a hot issue, partly because of concerns about the privacy of citizens.
NEW