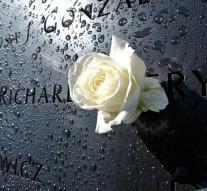 strasbourg - The European Parliament began its plenary session in Strasbourg with a minute's silence.

This was in memory of the victims of the '9/11' attacks in the United States on September 11, 2001, exactly sixteen years ago. Also, Antonio Tajani wanted to prove the 'innocent victims' of the hurricanes of recent days with a minute of silence.

Tajani said 'to condemn the inhuman violence' that many countries have hit the Twin Towers in New York since the attack, inside and outside the EU. 'Every attack makes us more determined to celebrate terror against terror. We will not swear. '

Tajani also asked attention for recent natural disasters 'in this terrible summer, up to and including yesterday. 'He addressed the hurricanes in the Caribbean and the United States, but also the earthquakes and floods in the EU. Recently, Brussels decided to make more money available for European regions affected.