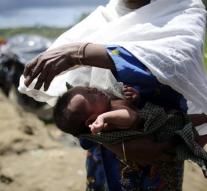 strasbourg - A trade mission from the European Parliament to Myanmar is postponed because of the violence against Islamic Rohingya in the country. 'It would be the wrong signal to talk about trade now,' said D66 European Parliamentary Marietje Schaake.

That is also true of Hans van Baalen (VVD), who will be leaving the delegation next week. According to him, it is better that the Foreign Affairs Committee goes to Myanmar, 'with a clear message to the regime that must stop human rights violations. '

According to Schaake, it is important that the EU takes everything out of order to ensure that the ethnic cleansing of the Rohingya stops. 'If necessary, sanctions. 'She also wants to favor Free Trade Agreements for Myanmar with the EU. Government leader and Nobel laureate winner Aung San Suu Kyi can not make military service, according to Schaake.

More than 300,000 Rohingya Muslims have fled to Bangladesh.