Home / World / EU parliament out of heavy criticism of Turkey 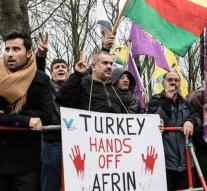 strasbourg - The European Parliament condemns new human rights violations and the further erosion of the rule of law in Turkey. It rejects, among other things, the arrests of Turkish scientists, journalists, activists, doctors and citizens who have criticized the Turkish military operation in the northern Syrian Afrin region.

Ankara defends the offensive with an appeal to self-defense and counterterrorism. The parliamentarians call on the European Commission and the Member States to raise the abuse of anti-terrorism legislation with the Turkish government. They also condemn the confiscation of fifty Christian churches, monasteries and cemeteries in the southern Turkish region of Mardin.

Turkey-rapporteur of parliament Kati Piri (PvdA) is very concerned about the muzzling of critics, the tens of thousands of 'unjustified' dismissals and arrests since the foiled coup of 2016. According to her, the state of emergency does not justify the repression 'in any way. '

Piri wants the EU to speak out loud and clear about human rights violations. This is, however, sensitive, partly because of the refugee deal that the EU has concluded with Turkey and the role played by the NATO ally in counterterrorism.

Europe had previously promised the Turks visa liberalization if all 72 conditions were met. One of these conditions is to adapt anti-terrorism laws. Turkey claimed this week to meet the conditions. EU Commissioner Frans Timmermans discussed this week with the Turkish ambassador to the EU.

A committee spokesman did not want to make any announcements about the outcome. 'The next step is Varna', he said references to a summit on March 26 in the Bulgarian coastal town. Turkish President Erdogan, EU President Donald Tusk and Committee President Juncker and Bulgarian President Borissov will meet there to discuss the relationship and developments in Turkey.