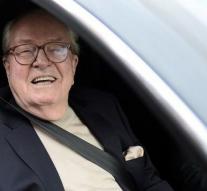 strasbourg - Former leader and founder of the French, far-right National Front Jean-Marie Le Pen on Tuesday his immunity as a member of the European Parliament lost. His colleagues agreed with a recommendation of the Legal Department, at the request of the French court also has begun an investigation into possible lifting of the immunity of Le Pen's daughter Marine, current FN president.

Le Pen senior, who remained after the break with FN as an independent in the EU Parliament, now hangs prosecution over the head because of 'inciting racial hatred'. He has been charged with anti-Semitic statements about the Jewish singer Patrick Bruel in 2014.

The requested waiver of the parliamentary immunity of its daughter is related to a complaint picture she tweeted the end of 2015 of the beheading of American journalist James Foley last year.