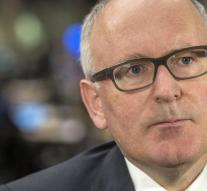 strasbourg - The European Parliament wants the EU to temporarily freeze the talks with Turkey. A large majority voted Thursday in this call because of the 'disproportionate repressive measures' in Turkey since the foiled coup July.

The parliament would be that Turkey remains on the EU 'anchored', despite the dismissal of judges and arrests of journalists and Kurdish parliamentarians. If the country would reintroduce the death penalty, the negotiations must however be put permanently abandoned.

The bulk of the 26 Dutch MEPs voted to freeze, including Turkey Rapporteur Kati Piri (PvdA). 'Turkey beats himself the door. The last three years we see more and more descend Turkey. 'The negotiations are, as it lies on its resumed only after Turkey lifted the state of emergency.

Hans van Baalen (VVD) voted against. He does not want to risk the refugee deal with Turkey. Peter van Dalen (Christian Union) spoke of a historic moment. 'Turkey is geographically, culturally and politically not a European country and that never. '

The call of the Parliament is not binding. Most Member States and the European Commission will still not stop the negotiations. According D66 MEP Marietje Schaake dare among others Prime Minister Mark Rutte and EU Commissioner Frans Timmermans Turkey not to criticize too hard for refugee deal. The issue is mid-December on the agenda of a summit of government leaders in Brussels.

The Turkish president Erdogan said Wednesday that the judgment of parliament for him has no value. He accused Europe to choose again on the part of terrorist organizations.