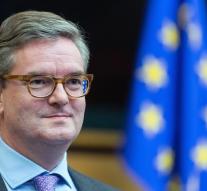 - "The European Parliament approves the appointment of Sir Julian King as the new EU Commissioner for Great Britain. After the Englishman Monday in Strasbourg to the tooth was felt on its plans in Brussels, Parliament Thursday gave the green light."

"King is nominated by the new British government, succeeding Jonathan Hill, who resigned after the 'brexit' referendum in June. Hill found that he could not remain now the United Kingdom to withdraw its EU membership. His sensitive portfolio (Financial Services) was adopted by the Latvian Commissioner Valdis Dombrovskis. King gets new portfolio Security Union."