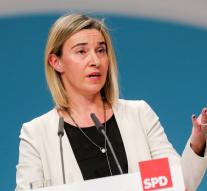 brussels - New negotiations with Turkey on accession to the European Union on Monday officially kicked off. That is seen as a reward for the commitment of Turkey to tackle traffickers and to prevent refugees take the step to Europe.

The European Ministers of Foreign Affairs Monday gave permission to open the negotiations on Chapter 17, which deals with economic and monetary policy. Negotiations on less than half of the 35 chapters. Only one chapter is closed.

" A strategic partnership with Turkey is necessary ", said Luxembourg's Minister Jean Asselborn, who chaired the meeting. He spoke of the " show of good will ".

To join the EU must meet a range of conditions, including in the field of human rights and press freedom. Several government leaders, including Prime Minister Mark Rutte, have sworn that is not tampered with these criteria. Rutte recently said that it can take decades before Turkey 's accession, if it comes this far.

Turkey has long been the EU candidate country, but negotiations opened in 1999 was put in 2006 on the back burner. Now Europe needs Turkish support, the talks will be again revived. Turkey is to start three billion euros to improve the conditions of the approximately 2 million refugees in that country. Turks also held out the prospect that they may be able to travel all over a year without a visa to Europe.