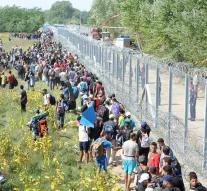 budapest - There will be no penny European money for the Hungarian border gate. This was announced by President Juncker of the EU Commission last night. He refuses to be solidarity with Hungary. 'Hungary also does not help us with the recruitment of refugees from Greece and Italy,' said Juncker, according to Bild.

Hungarian Prime Minister Orban had invited Brussels to contribute four hundred million euros to the 'new iron curtain', which he had taken along the Serbian and Croatian borders on his own. Thus, the arrival of predominantly Arab asylum seekers from war zones, called Orban terrorists, should be prevented.

Juncker wrote a letter to Orban pointing out that Hungary had received over six billion euros in emergency finance in a recent financial crisis. From the European Structural Fund, the former East Bloc, which maintains good relations with Moscow, gets up to 25 billion euros. 'That's the highest value of all EU Member States, about three percent of Hungarian gross national product,' Juncker said.

It is precisely two years since about one million refugees came through Hungary, on their way to countries such as Germany. Premier Orban did not travel to Vienna, despite train tickets. Then Merkel Chancellor said, because of the humanitarian emergency situation, she says with great emphasis, to include Syrian refugees.