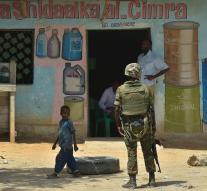 brussels - The two missions of the European Union in Somalia have been extended until 31 December 2018. The 28 Member States which decided Monday.

The civilian maritime operation EUCAP Somalia, which was formerly known as Nestor, the African country should help to maintain order at sea. Not only against pirates and smugglers, but also in the field of fisheries.

The military training mission EUTM is aimed to train and empower the Somali army since 2012. The budget for the next two years is 23 million. Netherlands since March 2013 provides a maximum of fifteen men a modest contribution to this mission.

The EU has recently been extended by two years the Atalanta mission which is to combat piracy off the coast of Somalia. The Netherlands is already eight years with it. The navy ship Zr. Ms. Rotterdam will be there next fall ten weeks before deployed.