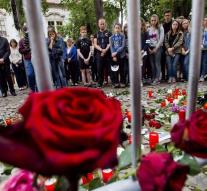 brussels - European foreign ministers meet Monday in Brussels to discuss the joint fight against terrorism., in reaction to the attack Thursday in Nice, France requested to put the issue on the agenda of the already scheduled meeting.

Normally terrorism file the Ministers of Justice and Interior. The Monday meeting is led by the Slovak Minister Miroslav Lajčák. For the first time after the referendum a 'brexit 'is also controversial, newly crowned British minister Boris Johnson there.

The pro-brexit campaigner Johnson dine Sunday in Brussels purchased with EU foreign chief Frederica Mogherini,, to learn 'before he goes into the lion's den.


Mogherini speaks Monday during an informal breakfast,, 'also with US Secretary John Kerry.