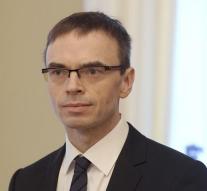 tallinn - The EU countries do not agree whether the talks with Turkey about accession to the EU should be broken down. This was shown Thursday at a meeting of EU foreign ministers in the Estonian capital of Tallinn.

Although, in practice, it has not been spoken for a while, Germany and Austria will formally suspend negotiations because Ankara is increasingly turning away from Europe. Countries like France and Finland want to stay in touch because of Turkey's importance in terms of migration and counter-terrorism. This also applies to the European Commission.

Germany also wants to stop talking about modernization of the Customs Union between Turkey and the EU, which would stimulate trade. Minister Bert Koenders expressed his support. He also expressed concern about the Turkish constitutional state, but said the German elections were awaiting. 'Then we can have more discussions about this. ''

According to Minister Sven Mikser of Temporary EU President Estonia, this year does not come to an end. He is not in favor of 'hasty decisions'.